TIRE AND RUBBER INDUSTRY OF THAILAND 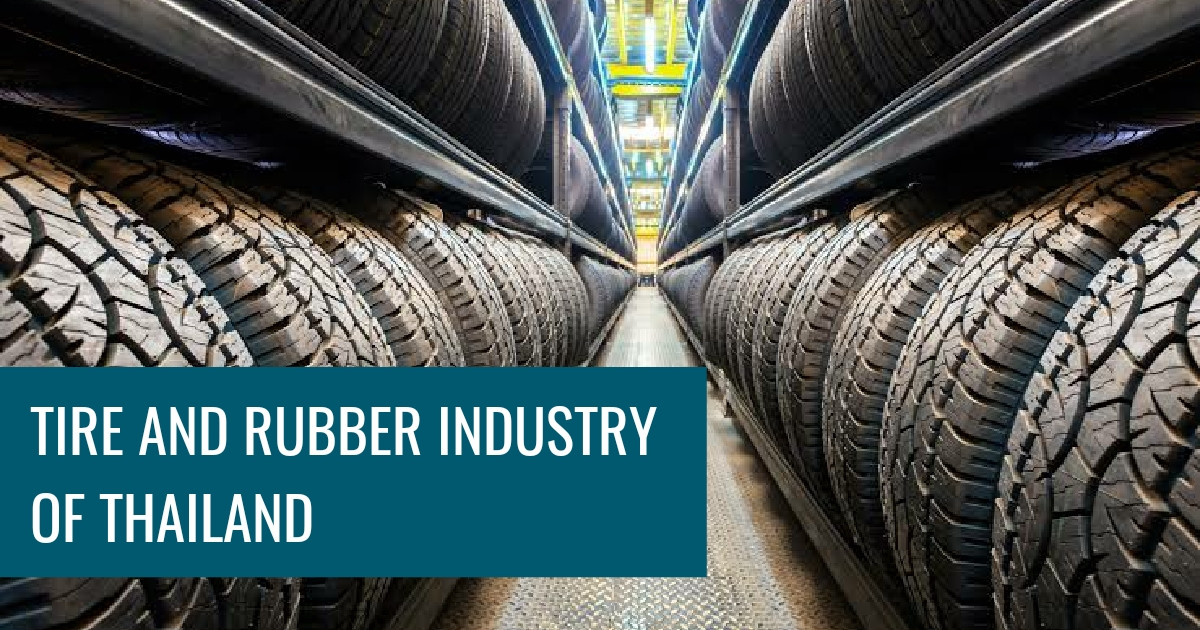 Asia is considered as the world’s crucial sources of rubber especially Southeast Asian countries that have hot weather and monsoon climate which are significantly conducive to rubber tree cultivation. Thailand, Indonesia, and Malaysia are the top three producers representing 75% of the global rubber output. Since the early 20th century, after rubber plantation was introduced to Trang province, the southern part of Thailand, it has grown to become one of the country’s important cash crops. With approximately 3.3 million hectares are rubber plantation area across the country and about 1.6 million households are rubber agriculturists, Thailand has become the world’s largest exporter and producer of high-quality rubber and rubber processing products such as tires, rubber gloves and condoms.

Thailand’s rubber industry has a full range of supply chain from upstream to downstream. The upstream is mainly involved with the planting and harvesting of rubber. Following by the midstream that involves the processing of rubber including the conversion of rubber into semi-finished products which will become the main   for downstream industry such as ribbed smoked sheets (RSS), technically specified rubber (TSR), concentrated latex and compound rubber and skim rubber. Lastly, the downstream industry includes the production of rubber products such as vehicle tires, gloves, condoms, elastics and shoes.

Between 2017 to 2027, The consumption of passenger cars and commercial vehicles are forecasted to rise a compound annual growth rate (CAGR) of 6.8% and 6.1% respectively. The growth in automobiles consumption will also lead to the increase in rubber tire consumption and production. The world’s automotive industry and the demand for passenger cars have been increasing steadily which impacts to the demand for rubber tires. The world’s rubber tire market is expected to grow 6.3% CAGR from the year 2017 to 2027 and expected to value approximately USD 645 billion at the end of 2027. Asia Pacific will remain to be the world’s major production and consumption of rubber tire. As economic growth in the region such as China, Japan and Indian have raised people’s demand for automobiles which boost the market growth for rubber tire.

The performance of Thailand’s rubber and tire industry

Thailand is facing with the shrink in natural rubber export value

Thailand is ranked as the world’s number one producer and exporter of natural rubber. However, the industry is facing with significant shrink in its overall export value and volume. The consumption of rubber was normally fluctuated and depended on several factors. Firstly, demand for primary products especially automobile that primarily uses rubber as one of the important automotive parts. As about 70% of Thailand’s rubber will be processed into vehicle tires. If the demand for automobiles increased, the demand for rubber tile would increase too. Secondly, many companies in China, America, Europe and Japan tend to use Synthetic rubber instead of natural rubber as it is lower cost. Moreover, Thai natural rubber industry is facing with increasing competitors especially from CLMV (Cambodia, Laos, Myanmar and Vietnam) nations as rubber has low level of product differentiation.

The rubber tire industry is still on the rise

Although Thailand natural rubber is facing with the shrink in its overall export value, Thai rubber processing products seem to have positive growth. Rubber processing products are ranked the fourth largest export value of Thailand. At the end of 2018, the total value of rubber processing products increased for 7.48% from the previous year to USD 11.02 billion. Almost half of the overall value came from the export of vehicle tires which valued about USD 5.1 billion or 11.45% increase from the previous year. In 2018, Thailand’s export volume of vehicle tires increased from 192 million tires in the year 2017 to 212 million tires in 2018, according to

As natural rubber is considered as economic plantation that used to generate high returns. In the year 2004 to 2010, the price of natural rubber reached the peak point which was about THB 190 per kilogram due to strong demand for natural rubber from China and India and high oil prices. Over the past half-decade, the raising of rubber price in the global market led to the continuous expansion of rubber cultivation across the world especially in Southeast Asian countries. The global rubber plantation significantly raised for approximately 14.1% from 78 million to 89 million rai which increased the volume of rubber supplies from 12.14 to 14.59 million tons in the year 2014 to 2018.

China and the US trade war is getting more serious after both countries began to impose additional tariffs on each other goods for up to 30%. On September 2018, The US charged the tariff for a minimum of 10% for importing of processing machine for rubber, natural rubber, chloroprene rubber, rubber parts and rubber products. On January 2019, the US raised the tariff on China’s rubber goods for 25%. On the contrary, China also imposed the tariffs on US goods imported to China and dropped the Chinese exchange rate (Yuan) to be weaker in order to offset the US tariff impact.

The prolonged trade war would significantly impact to Thailand’s rubber industry because China is the major export market and more than half of Thailand’s rubber sheet are exported to China in order to produce rubber processing products especially vehicle tires and rubber gloves. Parts of the rubber products from China are exported to the United States, the raising of tariffs affect the export of Chinese vehicle tires and other products produced from natural rubber.  Moreover, the consumption and the production of automobiles tend to be slow down which also impacts to the consumption of rubber and tires. In 2018, China reduced the import of natural rubber from Thailand for about 6.25% from 1.7 million kilograms in 2017 to 1.6 million kilograms in 2018. The total natural rubber export value to China significantly dropped for 32.66% from USD 2.19 billion in 2017 to USD 1.9 billion. The main reasons for this reduction are because of Chinese companies do not want to stock too much rubber in their stocks. Moreover, the drop of the Chinese currency and the strength of Thai baht make rubber more expensive for Chinese firms.

However, the impacts of US and China trade war might lead to many American and Chinese rubber companies are planning to relocate their manufacturing bases to other low-cost manufacturing countries in order to avoid being charged for additional tariffs.  Thailand is considered as one of the major countries that Chinese rubber companies might move to as the readiness of country that rich in natural resources that important for producing rubber processing products. According to Board of Investment (BOI), the first quarter of 2019, China plans to invest in Thailand for about 35 projects worth THB 2.3 billion increased from the same period last year for 23 projects. In addition, American companies also plan to invest on 8 projects worth THB 358 million. There are up to 5 projects that value more than THB 1 billion come from Chinese investment on tire production, air conditioner production and aluminum wheel production etc.

Opportunity and investment of Thailand’s rubber and tire industry

Thailand is the global production base for the global natural rubber. As the country’s rubber industry has high potential, there are several investments and government plan on developing Thai rubber industries including boosting domestic consumption, rubber city, aircraft tire manufacturers, tire testing center and the relocation of Chinese tire manufacturer. The investments will enhance competitiveness, develop sophisticated technology and create value added to Thailand’s rubber industry.

According to Bangkok Post, after launching the Rubber City project, it is expected to generate more revenue to rubber agriculturists and rubber processing firms. Thailand’s domestic consumption of rubber will increase for approximately 9,000 tons every year and expected to create about THB 450 million revenue. The rubber processing products are expected to earn 10 times comparing to natural latex which is THB 4.5 billion to rubber

Thailand is a second home for aircraft tire production of Bridgestone

Bridgestone, Japanese tire company plans to invest approximately USD 150 million or THB 6.1 billion on constructing 2 new manufacturing-based plants for aircraft tires and coated fabric in Thailand. The new Bridgestone aircraft tire manufacturers will be located in Eastern Economic Corridor. The first project will be located in Rayong province with about THB 4.6 billion investment, the manufacturer in this project focuses on producing aircraft tire and coated fabric. The manufacturer will be equipped with new technology that helps developing rubber tire structure to have better safety and reduce the use of fuel that suitable for large aircraft. The second project is located in Chonburi with the amount of investment of about THB 1.4 billion. The manufacturer in Chonburi emphasizes on using new production technology to retread aircraft tires.

Bridgestone already has 4 manufacturers in Thailand located in Nong Khae, Rangsit, Chonburi and Amata City industrial estate. The 4 plants focus on producing passenger, light truck, radial truck and earthmover tires; about 5,000 Thai workers are employed and more than 392,000 tires are produced per week. For the aircraft tire investment, Thailand will become the Bridgestone’s first country for the aircraft tire production outside Japan.  According to BOI, Bridgestone is expected to produce approximately 109,000 aircraft tires a year. The expansion of Japanese aircraft tire production plants will bring more employments, create value added to Thai natural rubber and increase rubber tire export value.

Prinx Chengshan, a tire manufacturer from China, will relocate it production base to Thailand. It signed the contract with WHA group, a Thai industrial development company, to invest and establish the tire factory at WHA Industrial Estate 3 where it is located in Eastern Economic Corridor (EEC). The company will invest in 300 Rai of land to build the first factory with the total investment value of THB 2.01 billion. The factory is expected to fully operate in 2020 which it will be able to produce 4 million radial tires per year and further expand their production up to 12 million radial tires per year by the end of 2025. As a result, the relocation of Prinx Chengshan company will, eventually, increase the demand of Thai rubber approximately 230,000 tons within 5 years.

Thailand has developed Automatic and Tire Testing Center: Research and Innovation Center (ATTRIC), with the investment of THB 3.7 million on 1,235 rai of land in Sanam Chai Khet district, Chachoengsao province as part of Eastern Economic Corridor (EEC) development. The project is separated into 2 phases. The first phase of the project involves tire testing under world’s standard (UN R117) and will be available in the end of 2019. The second phase will be developed for vehicles and auto parts testing including the test of long distance and high speed, brake performance, park brake, dynamic platform and skid-pad; the second phase expects to be ready in the year 2022.

The establishment of tire testing center aims to support car and tire producers in Thailand to meet the world’s automotive standard from the US, Australia, Europe and Japan and will turn Thailand to be a hub for automotive and tire technologies of ASEAN. Moreover, it expects to rise the domestic consumption of natural rubber for about 150,000 tons per year, create 6 million income for rubber farmers and will attract investment for at least THB 1 billion per year. Furthermore, the center allows car manufacturers and tire producers to test their products within the country which will reduce testing time for about 2 months. And also reduce the cost of sending car and tire for testing oversea for about THB 119 million.